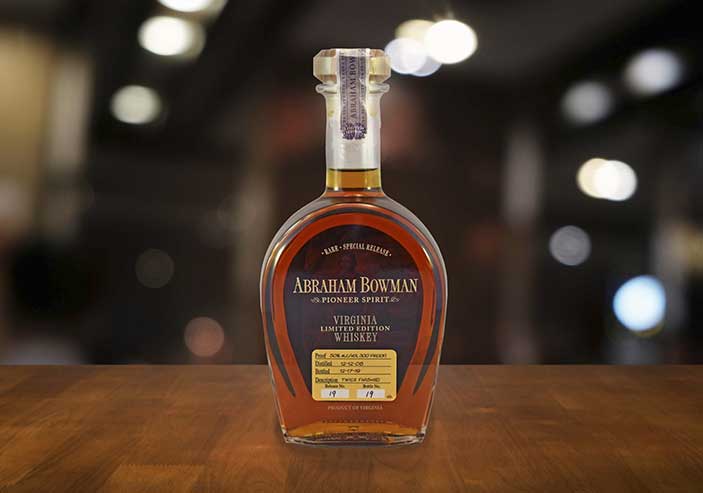 This limited release began in December 2006 when seven charred oak barrels were filled and laid to age peacefully for eight years and three months. From there, these barrels were consolidated into two-and-a-half barrels to be finished. First the whiskey was finished in Potomac Point Winery port barrels for four years and seven months. Then it was transferred into sauterne barrels for two months before being bottled yesterday, bringing the total age of this whiskey to 13 years.

The Twice Finished Whiskey was bottled at 100 proof, and will be very limited. These bottles will only be released to Virginia through the A. Smith Bowman Distillery gift shop on Saturday, Dec. 21 while supply lasts.

Tasting notes describe “upfront notes of sweet honey, and caramel with dried fruits from the port barrel lingering in the background. Heavy toasted oak flavors with a creamy mouthfeel and sweetness from the finishes coming through. The flavor finishes dry with coffee, dried figs, and hints of leather lingering on the palate.”

The Abraham Bowman Limited Edition Bourbon Whiskey is part of a series of limited-edition whiskies, named after Abraham Bowman, the commander of the 8th Virginia Regiment in the American Revolutionary War. Each edition of the Abraham line is a different expression and a new release is offered a few times a year. This is the 19th release in the Abraham line. The Abraham Bowman Twice Finished Whiskey will only be available at the A. Smith Bowman Distillery gift shop. Quantities are very limited. The Abraham Bowman series aims to release new and different expressions of innovative whiskey for each release, so it is unlikely this exact bourbon will be repeated. The total age of this bourbon is 13 years and it is bottled at 100 proof. These 750 ml bottles have a suggested retail price of $69.99.

About A. Smith Bowman

Smith Bowman’s distilling roots date back to the years before Prohibition when the Bowman family had a granary and dairy farm in Sunset Hills, Virginia. They used excess grain from the family estate to distill spirits. In 1934, after the Repeal of Prohibition, Abram Smith Bowman and his sons continued the family tradition and built a more modern distillery in Fairfax County, Virginia called Sunset Hills Farm. The Distillery was moved in 1988 and is now nestled in Spotsylvania County near the city of Fredericksburg, 60 miles away from the original location.

As a small and privately owned company, A. Smith Bowman Distillery continues the time-honored traditions on which it was founded. Considered a micro-distillery by today’s standards, A. Smith Bowman produces an assortment of hand-crafted spirits distilled from only the finest natural ingredients and using the latest technology. This micro-distillery focuses on the production of premium spirits honoring the legacy of Virginia’s first settlers. As Virginia’s oldest and most award-winning distillery, its various brands have earned numerous prestigious awards over the years, including John J. Bowman Single Barrel, which received a gold medal at the 2019 San Francisco World Spirits Competition. For more information on A. Smith Bowman, please visit www.asmithbowman.com.